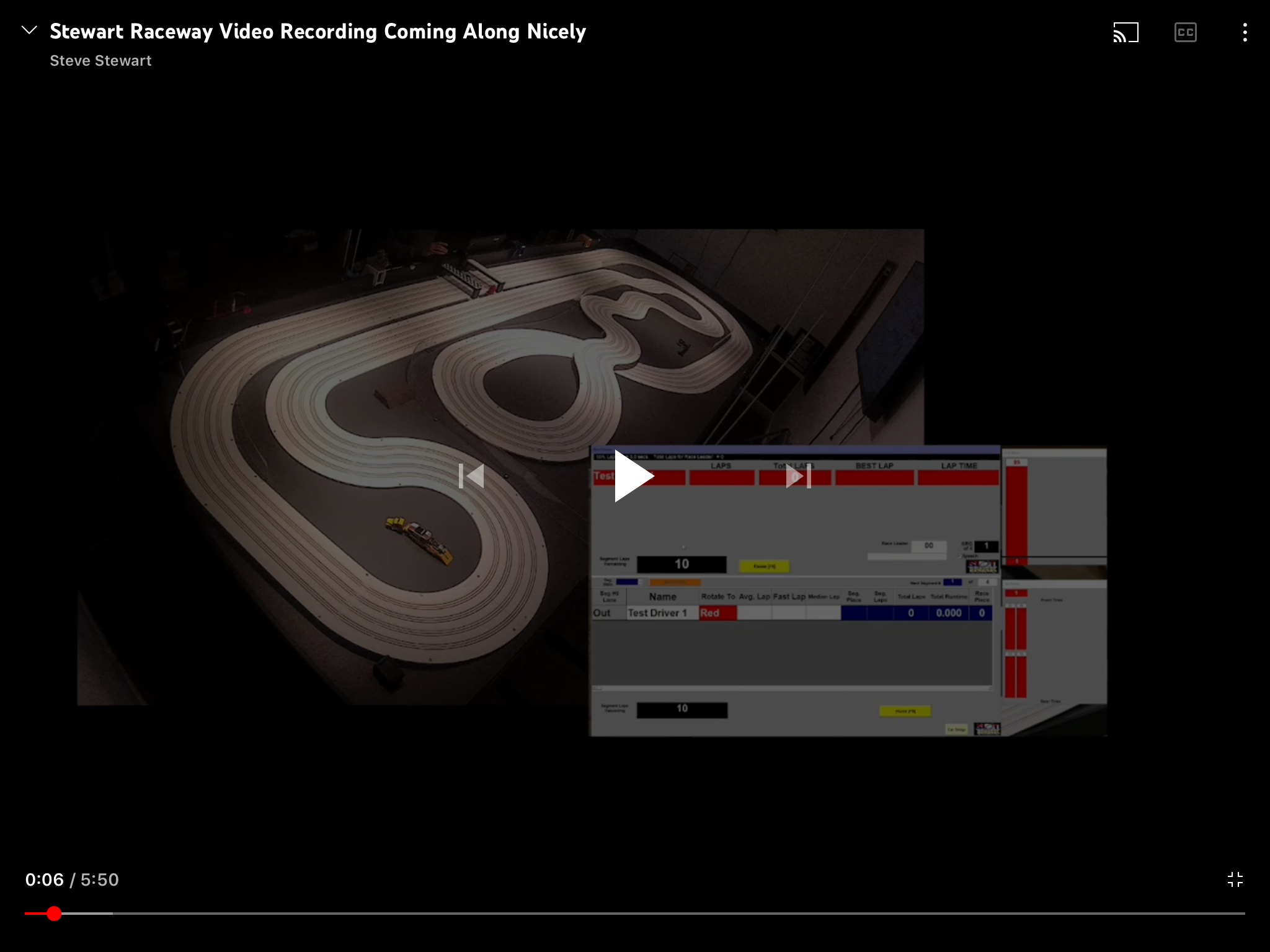 Still pursuing video recording of races at Stewart Raceway. The initial goal was to display the whole SR2 track on-screen, which was possible using inexpensive cameras. The next goal was to get the Race Management screens/windows in the recordings so viewers could see what the heck is going on.

Thanks to Open Source software developers, and just plain incredible talent in that realm, displaying the race management computer’s screen is possible. In fact, you can even display windows and areas of another remote or local computer’s screen–way cool!

So this video is a 10-lap segment race, utilizing fuel and tire allocation settings of SlotTrak’s RMS. SlotTrak is an amazing race management system.

Let me know your thoughts on this addition to the raceway. We can also do live streaming of race events with this setup. However, we have limits to how much data we can push to the Internet right now. That said, we could certainly live stream special events if warranted.

Well, I’ve had the equipment for well over a year now so I decided to play around with video recording races. At the moment, I’m trying it out on SR2, which is easier and more comfortable to test and dink around with this stuff.

I’m using cheap CCP 4K cameras, which are not ever going to produce professional looking video, but they are cheap. Right now I’m just focusing on capturing the whole track for the duration of a race. The issue with video is storage, just one heat of a short race can be as much as 10GB of data, depending on the length of the race.

H.O. scale racing adds another complexity in that the cars are the smallest and require the best possible capture resolution, which adds to the storage and video quality problems.

Anyway, this is my first crack at it. I need to work with my lighting director and improve in that area but it looks like–with a bit more tweaking–we can record a full race and be able to replay it, not only for posterity, but for entertainment and forensic evaluation afterwards.

Theoretically, I could also include the RMS screen (SlotTrak or RC) in the video, that would be way cool. I’ll work on the that soon.  After that, it’s going higher frame rates and producing good slo-mo action of crashes, starts, and finishes.

Please let me know what you think and any ideas you may have to make this more beneficial to us and our massive race fans. 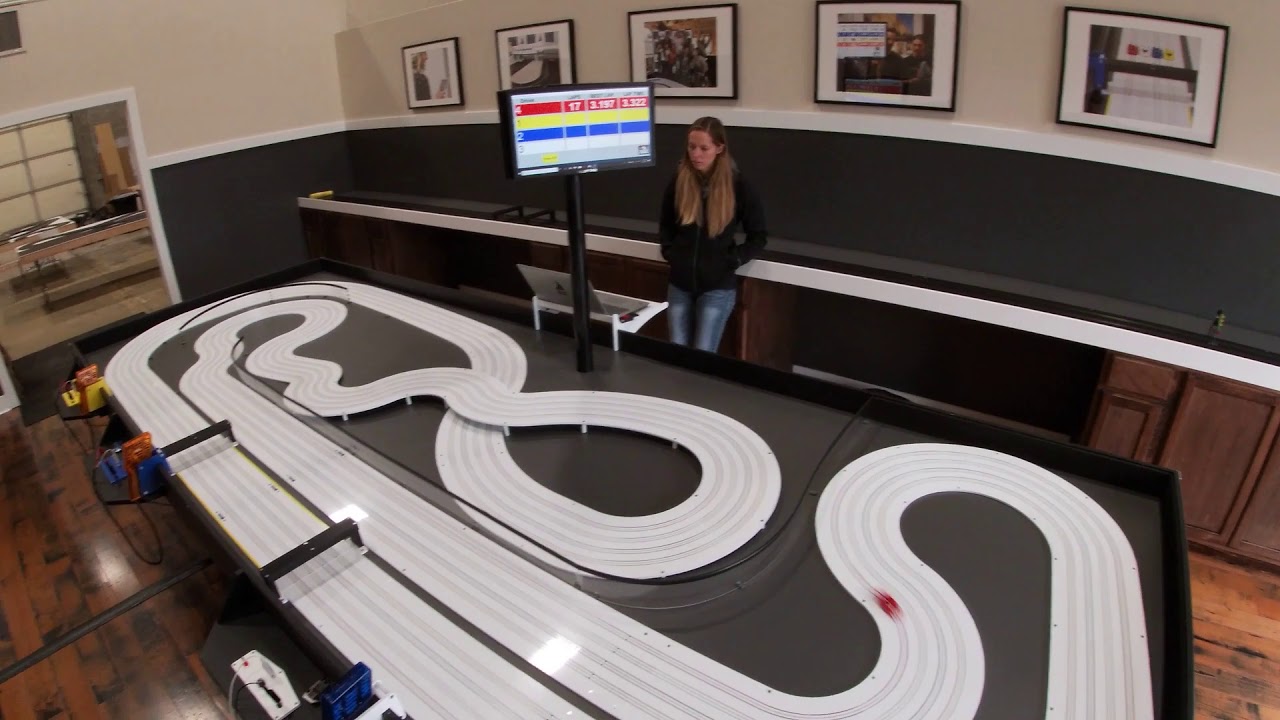 Yes, SR2 has a clone. After Dan Cronin of Viper Scale Racing finished building SR2, he quickly made another version. The only difference I can see is that he spaced out the pit and start/finish gantries to make fuel races a bit easier than the original version of SR2.

The original SR2 was designed by me but with a whole lot of input from local racers who own routed tracks and have raced on some of the most magnificent racing tracks ever built.

SR2-2 is no longer in Utah at Viper’s facility but it is still in use. In fact, the last time I saw it was at Musgrave Racing’s shop in Riverside, CA.

SR2-1 is still alive and well in the Santa Cruz Mountains. We haven’t raced on it in a while but I recently did a whole bunch of laps on it building two new Tyco-Jets for my IROC fleet. It is a very cool layout and the fact that it has multiple layouts, as well as converts to an oval, is very special. 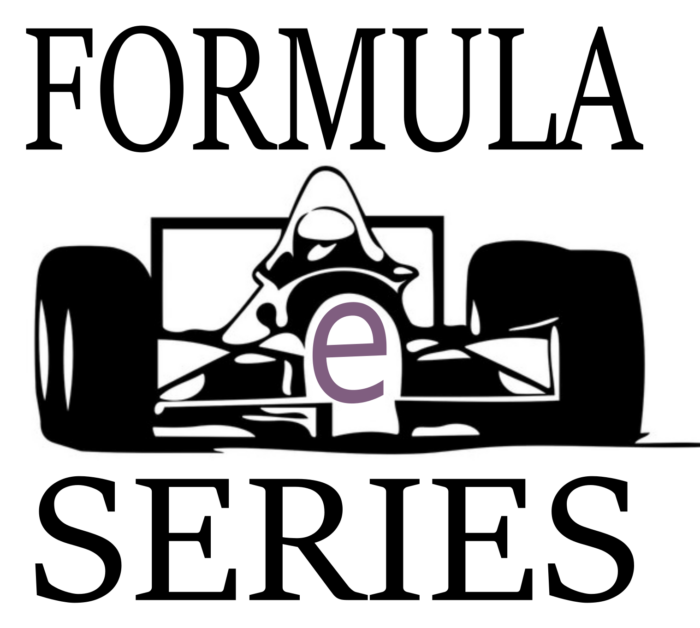 The final round of the 2022 Formula “e” Series is in the books. This series was unique in that it featured one class of car in a 400-lap, endur0-thon race at each event. We’ve all done 12-hour, 24-hour, six-hour race days. This feature race is a 50-lap/segment race where each driver does two rotations in each lane to complete 400 laps. Combine this with five other 20 or 30-lap races and you get a very stressful day of adrenaline-pumping action. 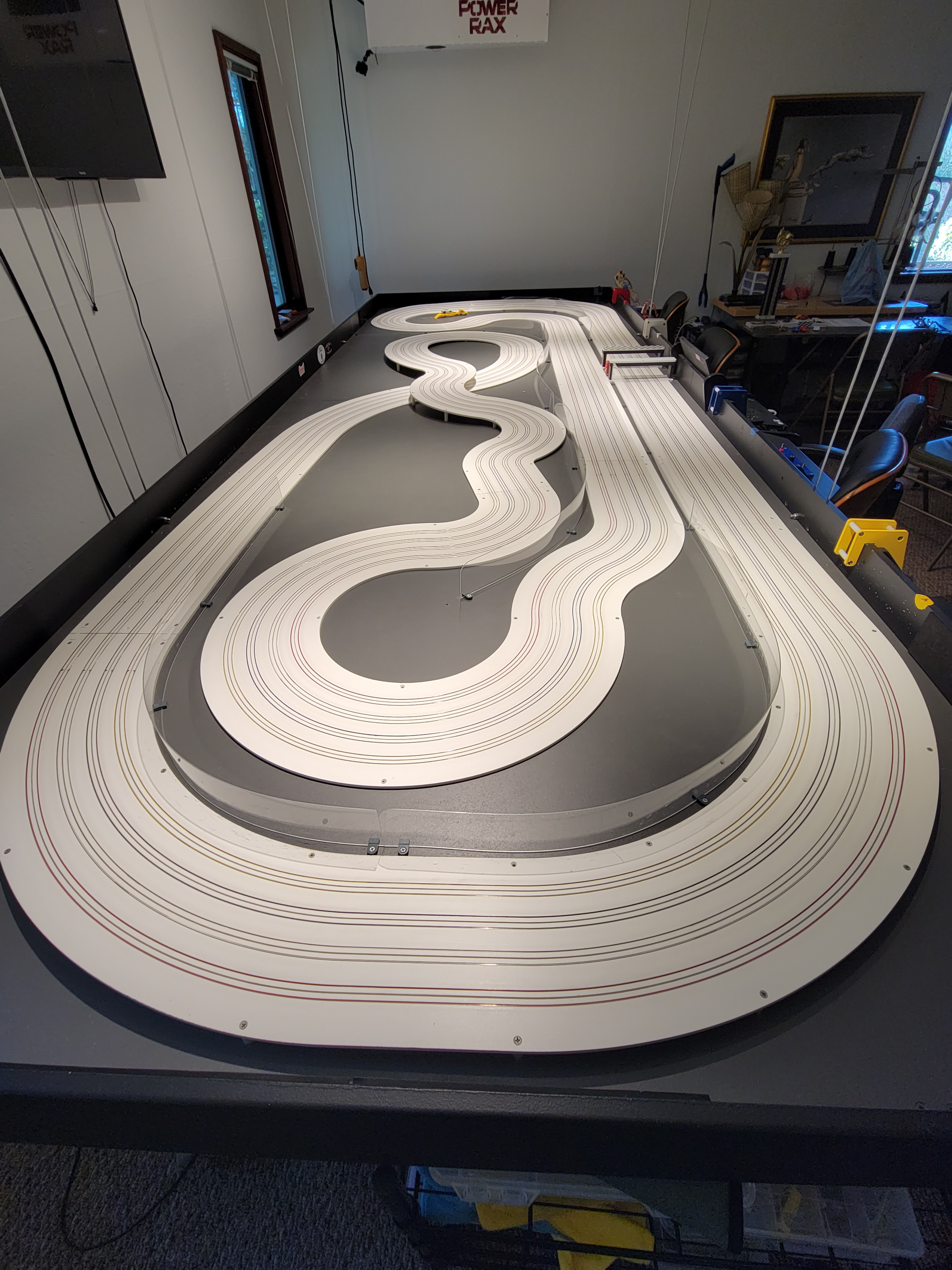 Round 5 was held on the SR2 straight road course and got underway a bit later than usual.

We ran a full program of six races, including the traditional Formula “e” Tyco-Jet IROC cars.

Two of the races would include Concourse d’ Elegance judging of all cars entered in each race. Going into the final round, Ian Douglass and George Peters were tied in Concourse points. At the end of the day, they would be tied again, with Ian winning the Viper Formula V competition and George winning the Jag Hobbies PR-5 Indy/F1 competition. Both cars were incredibly detailed and beautiful works of craftsmanship and art. 2021 Rookie of the Year, Brad Sandahl, presided as CdE judge.  Since Ian’s car suffered some serious damage in the Formula V race, and he’d already taken home the CdE trophy for the 2021 50/50 Series, he graciously conceded victory to George to settle the tie. (Sorry, our “senior moment” race director failed to get a pic–again!) 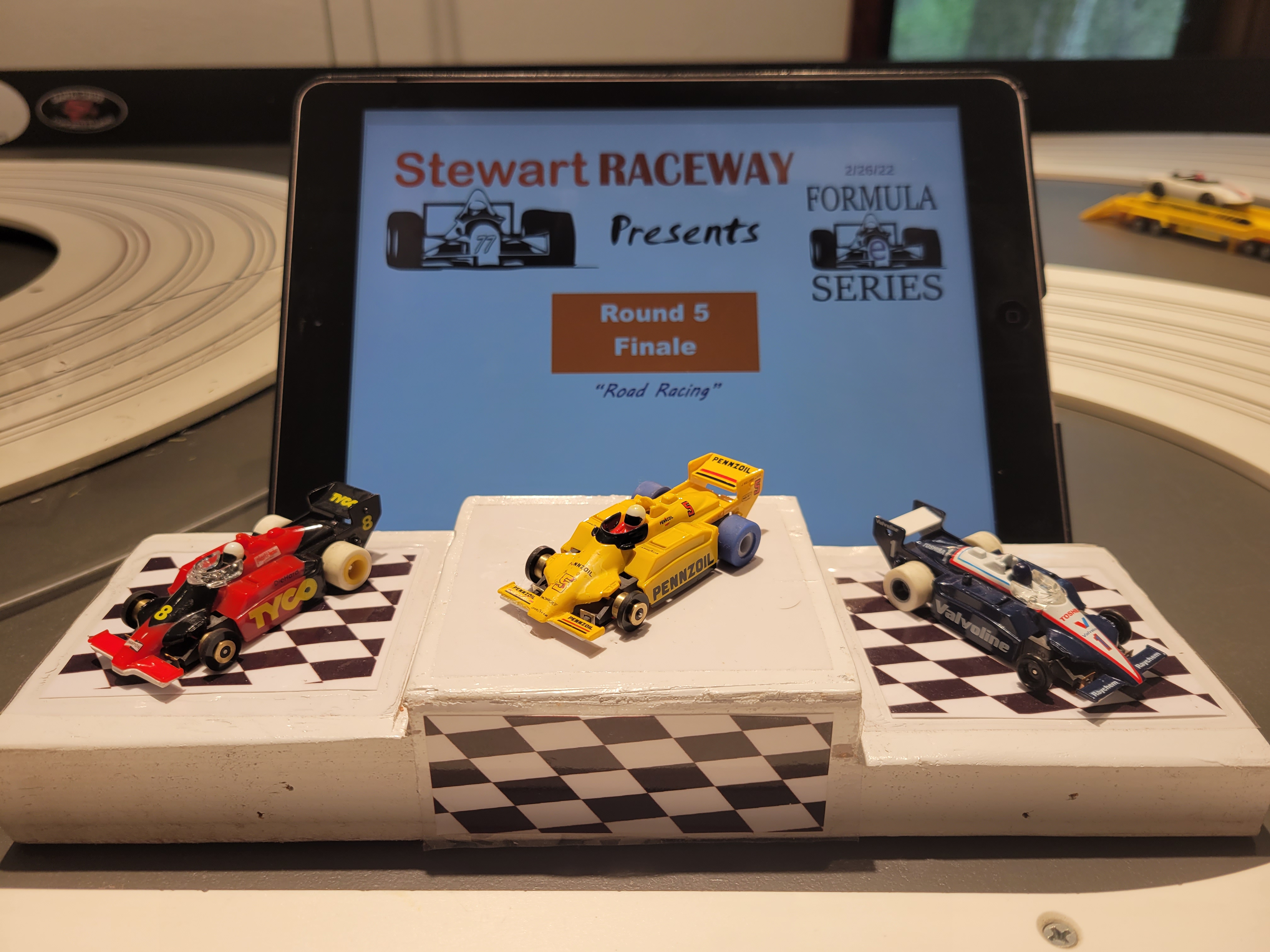 As always, the Tyco-Jet race was very competitive with Ian Douglass taking the win by just two laps to Home  Cook’n. Greg Kondrek would take the last podium spot. There was only one lap between second place and sixth place. 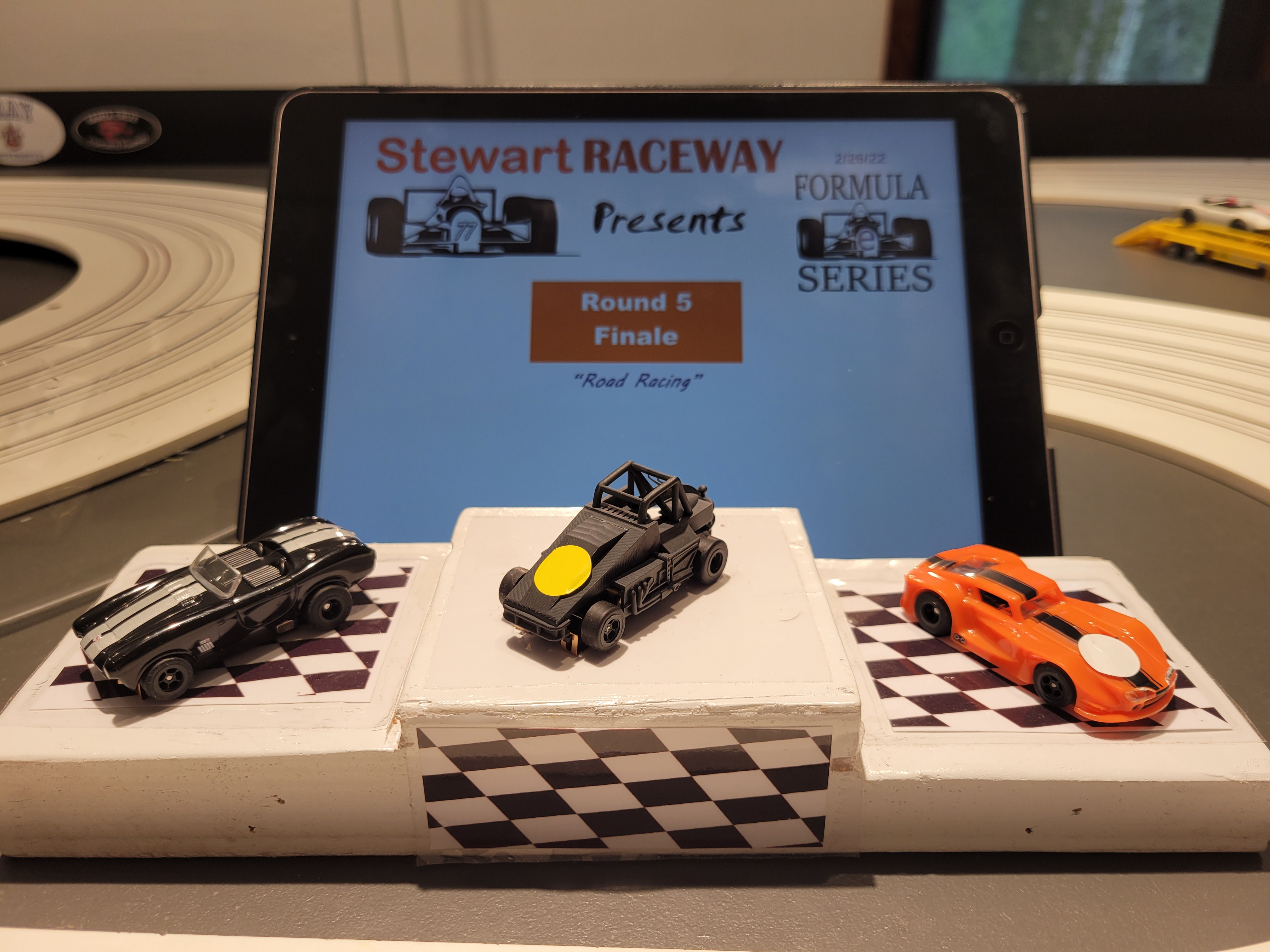 We hadn’t ever raced the TR-3 in an individual race, only IROC. This race was also hotly contested with Greg Kondrek taking the win (in a borrowed Sprint car) over Russ Toy by just two laps. Brad Sandhal would bag the final podium spot. Russ seems to like the TR-3 as much as he likes the NC-2, winning two heats and second overall. Kevin Webster had a great run in this one, just missing a podium spot by one lap. These Jag platforms are producing some very competitive racing, again with second through sixth each separated by just one lap at the finish–amazing! 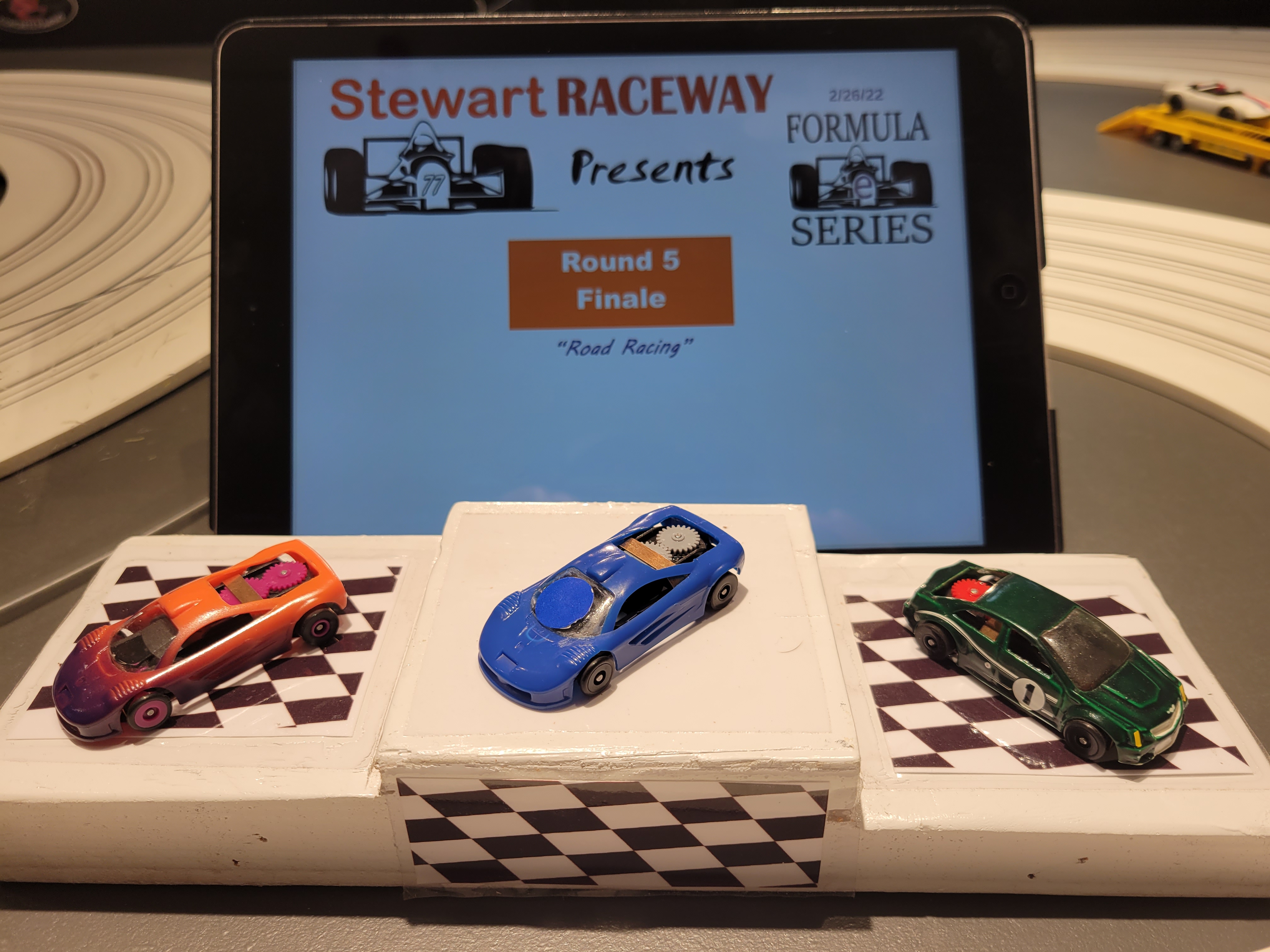 We tried to field TFX “Modified” cars for this race but just didn’t have enough cars to go around. In the end, Home Cook’n took the win just one lap ahead of Ian Douglass. The big story in this race was Kevin Webster again fighting very hard and well on his way to a podium finish when the ugly “Pit-In” bug reared its head, not once but twice. Kevin came in second in two heats and was looking like he might just land on the podium in this one before the bug hosed him.  T-Jet “ace,” George Peters would round out the podium in his Concourse d’ Elegance winning Caddilac. 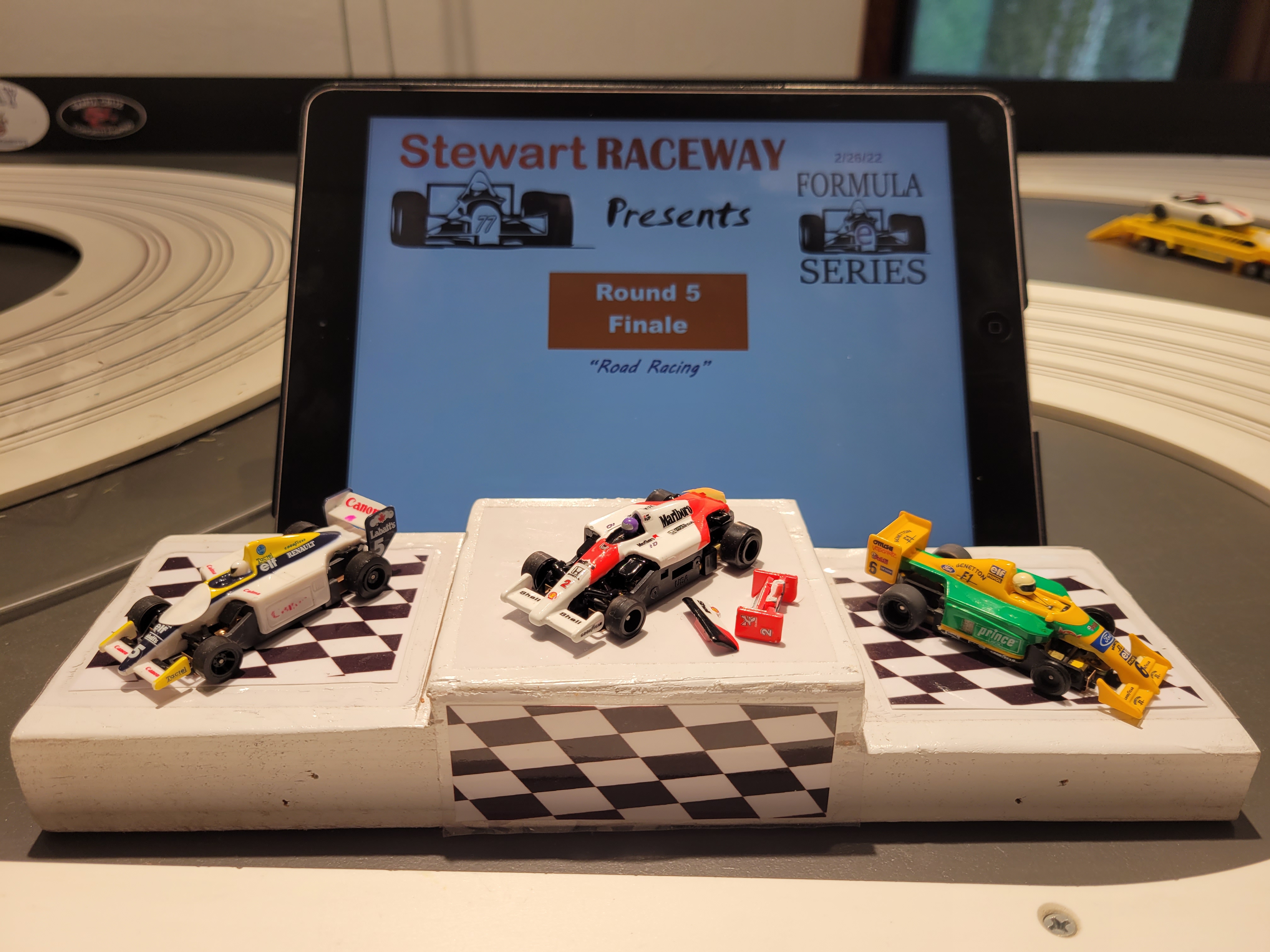 Our newest class and the second time we’ve run these. This car is just a Viper-Jet chassis with a long wheelbase and hard F1/Indy style body. Ian Douglass dominated this one with three heat wins and a perfect score. 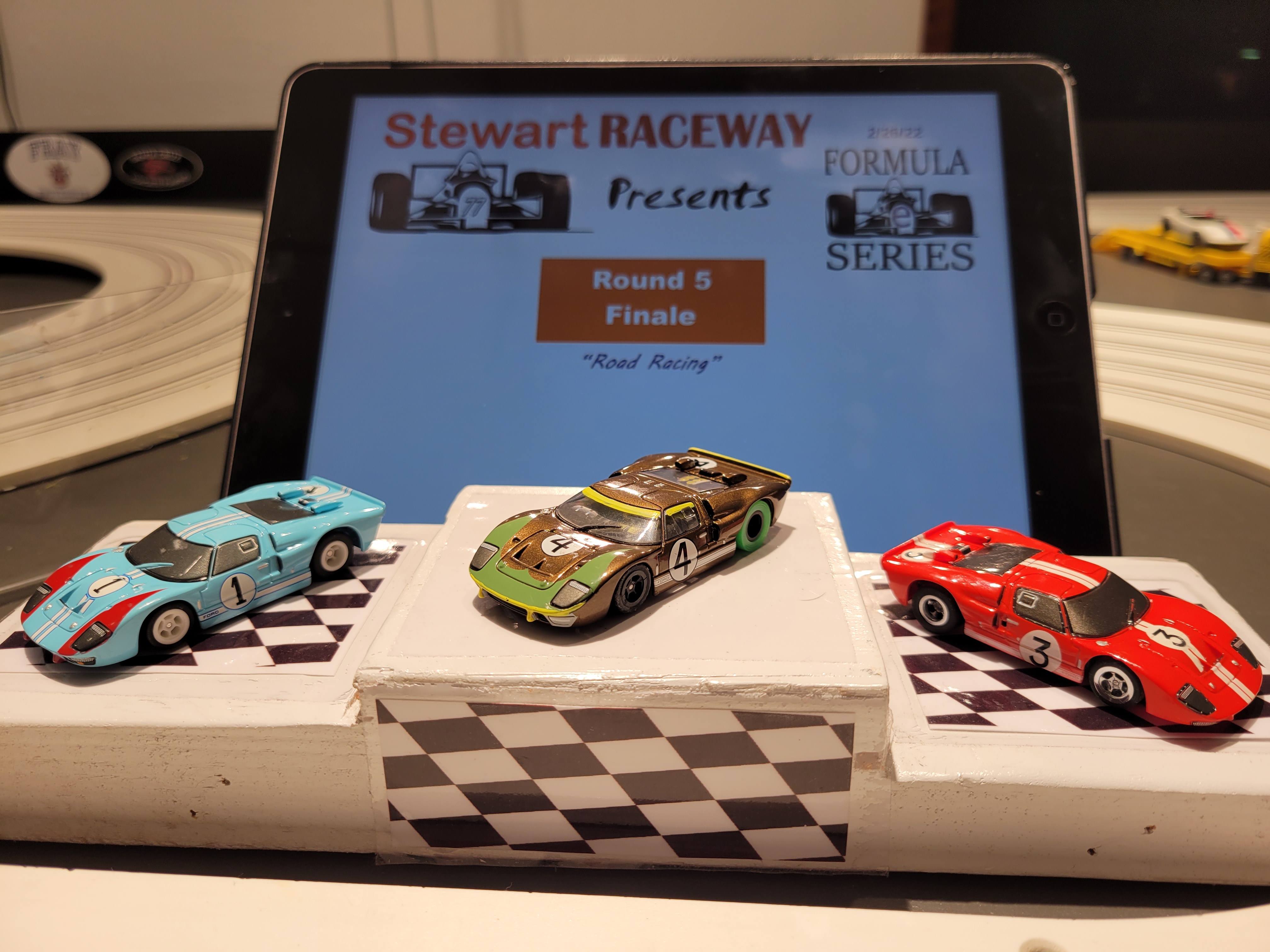 As usual, the NC-2 race was hot and heavy and extremely competitive with a multitude of different drivers winning heats. Expected favorite, NC-2 “Ace” Russ Toy, did not have a great run in this one and was only able to win one heat. In the end, Ian Douglass came out on the top with 79-laps. 2021 Rookie of the Year, Brad Sandahl, took second with current series points leader, Greg Kondrek landing the final podium spot. 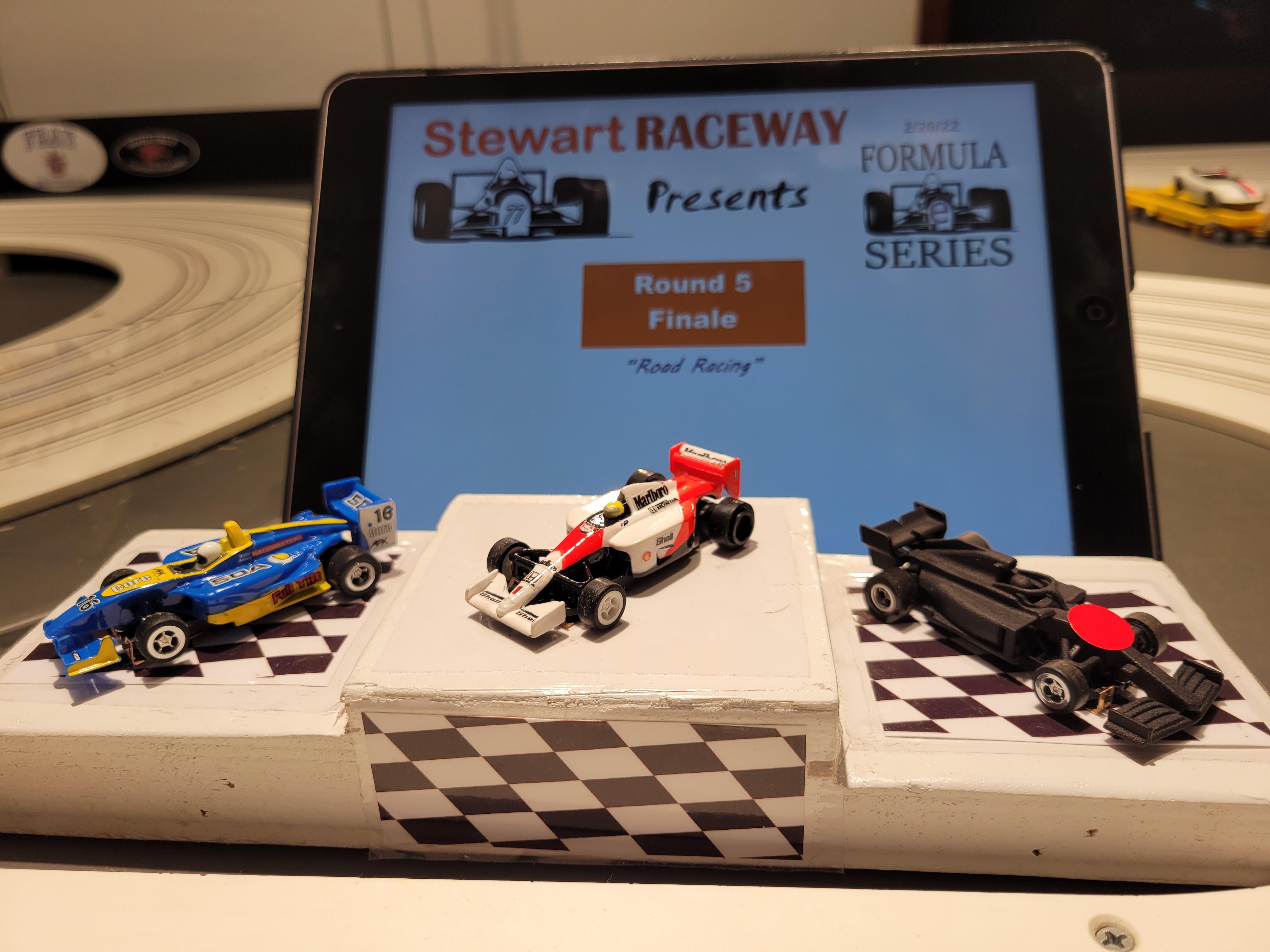 The Formula-e “Feature” race was saved for last this time based on input from drivers that felt it was way intense and should be the final race of the day. Don’t think many would argue that point. The Jag Hobbies PR-5 platform is very fast and a bit more difficult to drive due to the characteristics of the car that the “Box Stock” rules create.

From almost the very beginning, this race was a battle between Ian Douglass and Brad Sandahl.  Both drivers won plenty of heats but both drivers also had a few less than perfect heats and came up short in total laps, which isn’t unusual for this race format. Of course, other drivers were still in the hunt and putting pressure on both of them. Greg Kondrek, Kevin Webster, Home Cook’n, and George Peters were all very much in the hunt until about segment 13 of 16. Ian finished his rotation by winning the heat with a perfect score, putting him and Brad in first and second with 395-laps for Ian and 393-laps for Brad. Nobody could better those numbers going into the final two segments. Ian would win the feature event by just two laps over Brad Sandahl, and 17-laps over Home Cook’n in third place. The 400-lap event is all about fuel management dynamics and racing the track, not other drivers.

Hat’s off to Ian Douglass. He needed a little help to have a shot at displacing Greg Kondrek’s points lead in the series. Greg fought hard, including two spectacular performances with borrowed cars. Brad Sandahl, having missed three of the five races, and most of Round 1, came back to racing in Round 5 and showed that he’s the “real deal,” placing third overall.

Okay, so who the heck won the 2022 Formula “e” Series? Well, we didn’t know for sure on Saturday after the race due to the complexity of the points system. But now we do… 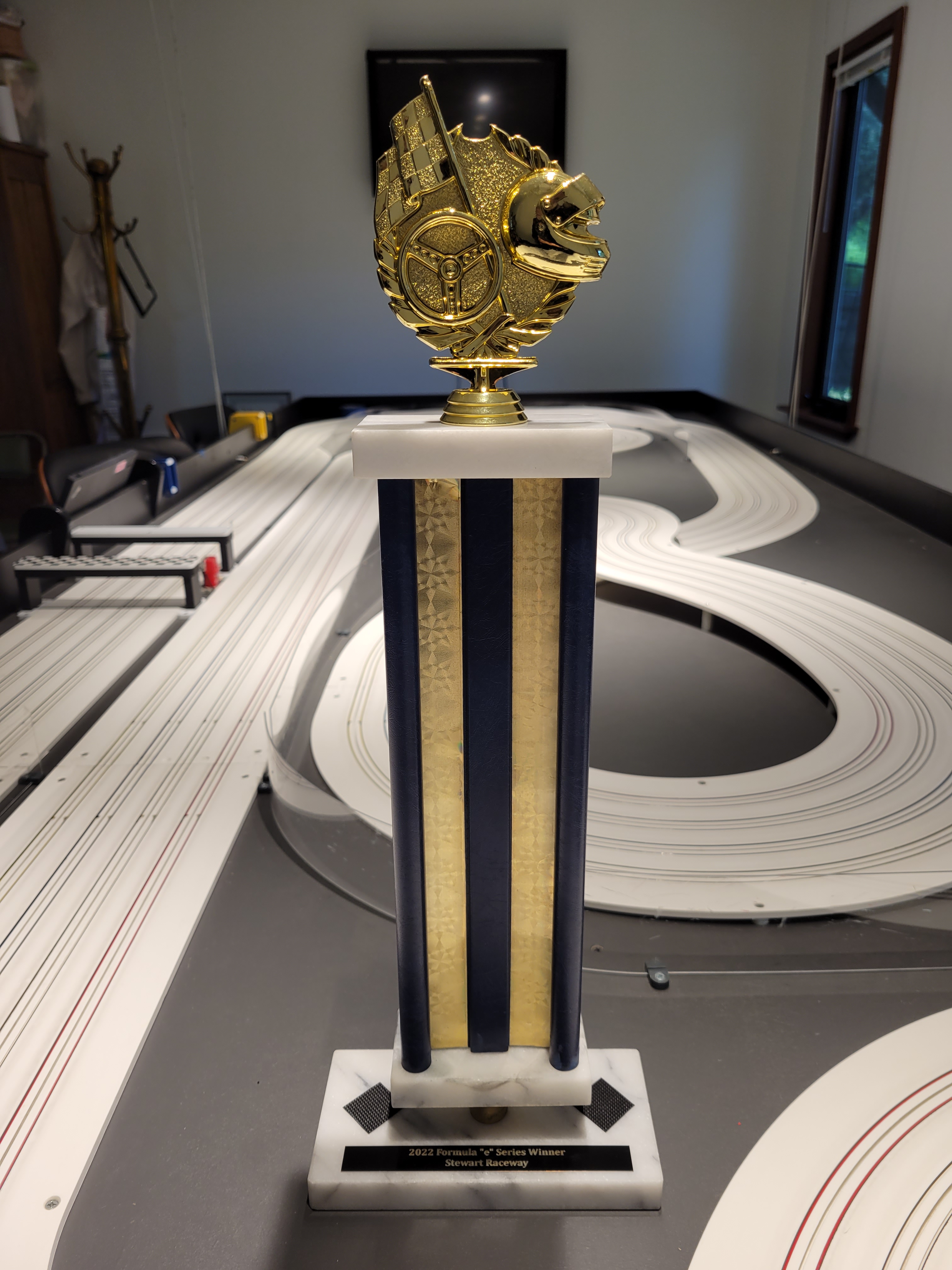 Wow! Another great series and very competitive racing. Congratulations to Ian for winning his second straight Stewart Raceway series and supporting our racing program. Ian is a class act and an extremely talented and accomplished slot car racer/builder. He also has an incredible talent for tuning and campaigning some of the best performing and nicest-looking cars we’ve seen since Ted Essy abandoned us for Sac…just saying.

Also, hats off to our 2021 “Junior of the Year” driver, Jordan Walker, for putting up with all of us “old school” guys and showing up every other weekend to race little cars with us. He’s constantly improving and has clearly demonstrated that he’s got what it takes to win races.

We’ll have a “lavish” awards ceremony the next time we formally meet, including medals to the second and third-place finishers, Greg Kondrek and George Peters.  Very impressive driving by all!

Okay, going into the finale round on February 26, here are the current points standings complete with Finished Ahead Of (FAO) and Appearance points:

The final round is expected to have a full field present and ready to race. NC-2 ace, Russ Toy, and 2021 Rookie of the Year, Brad Sandahl, have informed us that they intend to return to racing in the Round 5 road-course finale. 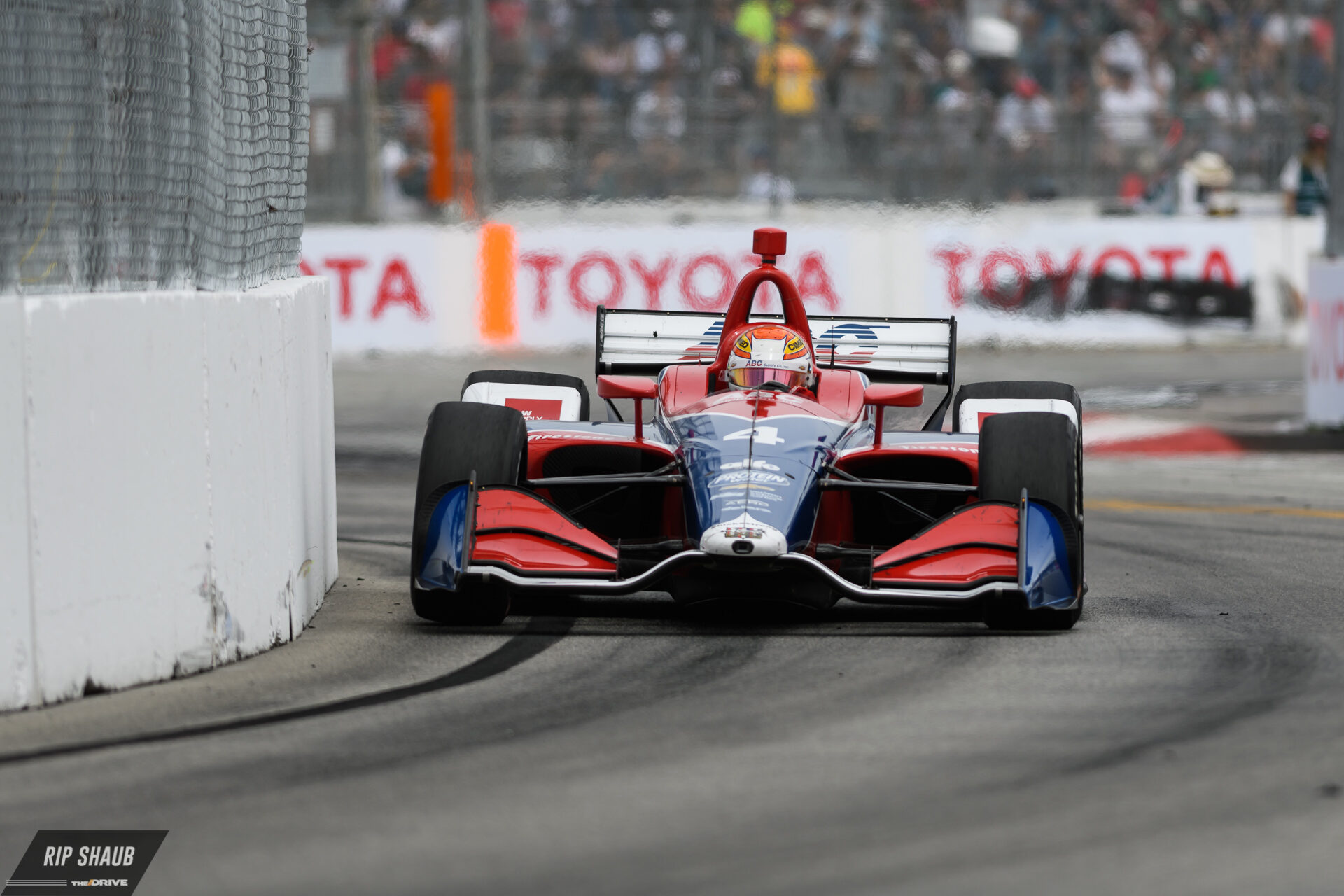 Wildcard, George Peters, looks to be well-positioned for that last spot on the finale podium. However, with Russ and Brad back in the mix, it’s going to be a wild time for drivers shooting for those top 3 finishing spots.

For the rest of us, we’ll all be doing our best to win races and disrupt the predictions of the media and expectations of our beloved competitors—as we always do.

Stay tuned for a Round 5 race day schedule and registration link. If you have some suggestions for classes to run, please let me know ASAP.